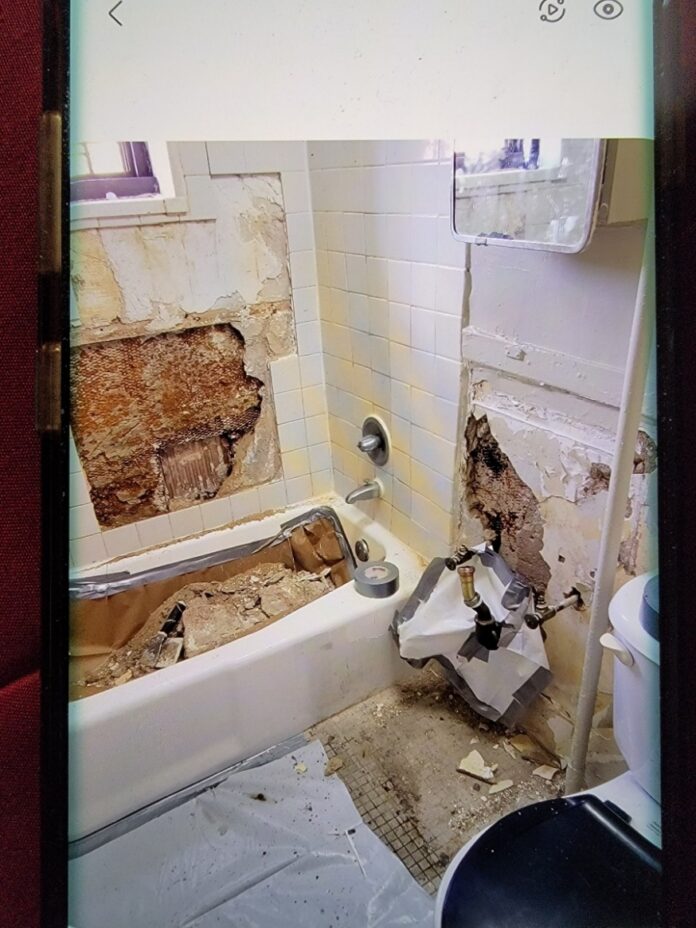 (BROOKLYN, New York): As we head into the Christmas Holiday season, fear and anxiety grip NYCHA residents across the city who are on “pins and needles” over the possibility of mass evictions amid record rent arrears. According to reliable sources, more than 68,000 NYCHA households are behind in rent payments. And that’s not where the problems end. Open entry doors and busted locks in public housing have been a problem for decades, but a new “structural field review” from the city’s comptroller’s office, who called it an example of “resident-powered auditing,” shows that the problem has gotten far worse over the last few years.

The report by New York City’s Comptroller, Brad Lander, shows that NYCHA buildings have become much less secure since 2018. The review by the Audit Bureau of 262 New York City Housing Authority developments between August 3 and September 8, and obtained first by THE CITY, found that almost three in five buildings, 57.9%, were unsecured — with open entry doors, locks that were broken, or both — nearly three times the 23.5% of buildings that were unsecured in 2018.

In all, 66% of doors in NYCHA houses in Brooklyn were unsecured, 63.5% of those in The Bronx, and more than 35% of those in Manhattan, Queens, and Staten Island. The percentage of unsecured doors was up by double digits since 2018 in every borough except Manhattan (up 9.2%) — from 28.1% in Queens to 49.1% in Brooklyn. These ugly results of the comptroller’s audit, undertaken in direct response to consistent and persistent resident complaints in a survey from Lander’s office, and

To compound the problem, NYCHA is now owed more than $364 million in rent for 2021, marking the most significant amount of unpaid rent in the agency’s history, the agency told the New York Times. More than 68,000 households in the system are behind on rent as of November, approximately 42 percent of all NYCHA residents, up from 35 percent two years ago.

“I’m scared that I’m going to get evicted,” said Eileen Dominick, an NYCHA’s Red Hook Houses development resident who said she owes more than $3,000 in back rent. After the eviction moratorium expired, NYCHA told residents in an email it would “restart nonpayment eviction proceedings.” But the agency is focused on a smaller group of tenants owing money before the moratorium went into effect. According to the New York Times, the 2,600 households being targeted owe about $50 million. “We want to make sure that we are pursuing evictions as a matter of last resort,” said Lisa Bova-Hiatt, NYCHA’s general counsel.

But that does not quell fears from residents that they will ALL be targeted, especially in the context of NYCHA’s planned privatization program. Moreover, assurances from NYCHA stand in stark relief to the agency’s history of filing evictions against many tenants, a pattern that preceded the COVID-19 pandemic. For example, data from the New York State Office of Court Administration show that the agency filed more than 40,000 eviction cases annually between 2016 and 2018. However, fewer than 700 people were ultimately evicted each year.

Compounding these problems is that recently NYCHA notified federal officials that a pandemic-triggered shortfall in rent collection is threatening its ability to meet a schedule of apartment fixes mandated by a 2019 court-approved agreement. Making matters worse is a lack of aid flowing through the agency from the state’s $2.1 billion rent relief program, which has now run dry. According to the housing authority, a court-ordered timeline for fixing boilers and elevators and eliminating toxins and pests is now imperiled by a gigantic deficit in rental revenue.

NYCHA and the Department of Housing and Urban Development (HUD) reached the agreement in January 2019 following a damning investigation by the U.S. attorney for New York’s Southern District that found NYCHA officials had lied for years about the scandalous conditions of so many of their 175,000 apartments.

The money crunch is also complicated by thousands of applications from NYCHA tenants for reimbursement from the state under the pandemic-related Emergency Rental Assistance Program (ERAP). Under ERAP, public housing residents are at the back of the line for repayment. No money from the ERAP fund has been spent on NYCHA tenants’ rent arrears.

“We should have $443 million that we would spend on operations and the HUD pillar areas, and we don’t have that,” said NYCHA Chief Financial Officer Annika Lescott-Martinez. “It’s going to be hard for us to continue our investment pace. It’s a financial strain. We’re limited on what we can and how fast we can do it.” A spokesperson for the housing authority said, “NYCHA takes the safety and security of residents very seriously and will work to repair all of the broken doors and building locks identified in this report.