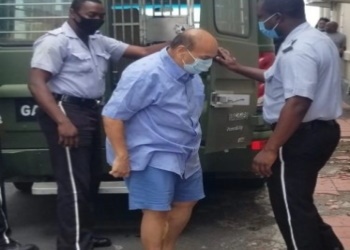 ROSEAU, Dominica – The acting Director of Public Prosecution (DPP), Sherma Dalrymple, has discontinued the case against India-born Antigua and Barbuda citizen Mehul Choksi, who had been accused of illegally entering the island in May last year.

Choksi, 63, who had pleaded not guilty to the charge of illegally entering the island, claiming that he had been kidnapped in Antigua and taken here on May 23, 2921, had been released on EC$10,000 (one EC dollar=US$0.37 cents) bail in July last year, to allow him to travel to Antigua and Barbuda for medical treatment. Mehul Choksi (center) during one of his several court appearances in Dominica (CMC File Photo)

Choksi is also wanted by the Indian authorities for US-multibillion-dollar bank fraud, a charge he has denied.

Dalrymple said her decision was by the provisions of section 72(2)(c) of the Constitution of the Commonwealth of Dominica.

“I do discontinue the proceedings mentioned above against the said Mehul Chinubhai Choksi,” according to the notice dated May 17, 2022, and sent to the Chief Magistrate.

James Lynch, a spokesperson for Choksi, issued a statement saying that the businessman “is pleased that the Dominican Government has dropped all charges against him for unlawful entry in May 2021. They now recognize that there was never any case against him for doing so.

Lynch maintained that Choksi was forcibly removed from Antigua against his will by agents of the Indian State, viciously assaulted, and taken to Dominica by boat. He was again unlawfully handed over to authorities for an offense never committed.

“Mr. Choksi’s legal team continues to pursue all avenues for justice to redress the human rights violations committed against him. Mr. Choksi hopes that those responsible for his kidnapping from Antigua on May 23, 2021, will be brought to justice.”

Last year, Prime Minister Roosevelt Skerrit dismissed as “total nonsense” suggestions that Dominica and Antigua and Barbuda had played a role in the alleged kidnapping of Choksi,

Skerrit reiterated that Choksi, who had been granted Antigua and Barbuda citizenship in 2017 under that island’s Citizenship by Investment program, will have a fair hearing before the courts.

“This idea of a collision between the governments of Antigua and Dominica is total nonsense,” Skerrit said, adding, “whatever facts, whatever information Mr. Choksi may have, he has an opportunity to present it before the courts.”

“But to say that the government of Dominica, the government of Antigua colluded, give me a break! That’s total nonsense; we don’t get involved in those types of activity, those practices,” Skerrit said, further describing the allegation as “absurd.”

The Indian judicial authorities want Choksi for criminal conspiracy, breach of trust, cheating, and dishonesty, including delivery of property, corruption, and money laundering.

The application for judicial review in the Choksi matter, which was filed, has also been discontinued.