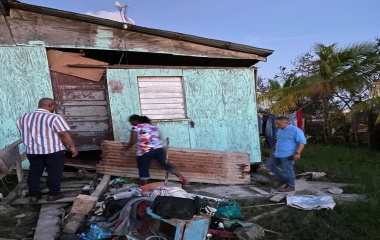 BELMOPAN, Belize– The Belize government says it will need at least US$20 million to assist with the rebuilding of storm-ravaged communities in the Belize District following the passage of Hurricane Lisa last week.

“Minister Courtenay was with me on the flyover because Foreign Affairs is in charge of cooperation within the government,” Briceño said, noting that Courtenay and DeFour have since prepared a short document on the matter.

He said that the initial numbers that the Ministry of Infrastructure Development and Housing has come up with are approximately US$20 million, which would include almost literally rebuilding the Philip Goldson Highway from the city up to the Haulover Bridge.

Briceño said a majority of the structures that were damaged during the passage of Hurricane Lisa were homes that were constructed with plywood.

He said the plan is to rebuild using concrete and other materials that can withstand the stresses of gale-force winds.

“Most of the houses that were destroyed are these plywood houses or houses that were just quickly put together. A boarding house, if it was properly built, can withstand the hurricane,” he said, adding, “if you look at the low-cost housing that the Ministry of Housing has been doing in the city, all of them, no damage to the buildings.

“So our idea is that we want to be able to build as many houses as we possibly can, for as many people as we can, within these areas and then also then for probably middle-class families to see if we can get some low-cost funding and interest rates so that they could also rebuild and rebuild better. “We cannot continue giving them plywood houses because we are not doing anything for them because it will go away with the next storm. It will be blown away, and you will continue to perpetuate poverty. Regarding our people’s conditions, nobody should live in those conditions in 2022 anywhere in the world, especially here in Belize.

“So, the job, the task ahead of us is huge, but we have to start somewhere, and I think that the best opportunity to start is now to ensure that we can get, to be able to assist people more long term than as opposed to short term,” Prime Minister Briceño said.

He said the authorities are busy, working closely with all relevant government agencies to restore a sense of normalcy in Belize City. Monies have been made available through the Constituency Development Fund for area representatives to assist constituents who have suffered losses due to the hurricane.

Briceño said the utilities have, for the most part, been brought back online.

“Pretty much what we have been doing for the past few days, we’ve been more in a relief mode, that we are going out there looking at the people in the different areas, divisions, and finding out what they need.

“And while we appreciate what NEMO has been doing along with the Belize Defence Force and the police, we quickly sent out monies through the Constituency Development Fund so that the elected representatives can immediately go in and start to give out assistance. We have given it to all the representatives,” Prime Minister Briceno added.