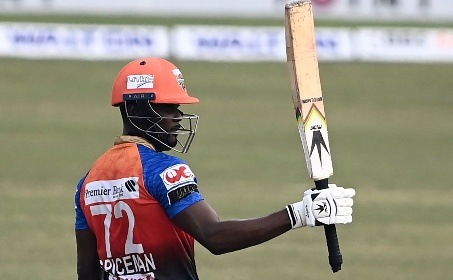 Playing in the final game of the opening day double-header at the Mahinda Rajapaksa International Cricket Stadium, the 35-year-old carved out a chance 102 not out from 67 deliveries – his third T20 franchise hundred, with all coming on the subcontinent.

Fletcher’s opening partner Pathum Nissanka struck 71 from 41 deliveries, the pair helping Falcons up to 199 for one from their 20 overs.

Captain Angelo Matthews top-scored with 26 from 23 deliveries at the top of the order, while West Indies all-rounder Keemo Paul struck a 15-ball 22 at number nine, but they were just two of three batsmen to reach double figures in a batting meltdown.

The fireworks came in the first half of the game, however. Fletcher, fresh from the Abu Dhabi T10, where he failed to fire, clobbered 11 fours and three sixes as he inspired a record 156-run opening partnership with Nissanka, who belted eight fours and a brace of sixes.

Fletcher ensured there was a strong finish to the innings as he put on a further 43 in an unbroken second wicket stand with former West Indies captain Carlos Brathwaite (20 not out).

Dropped before he had scored in the second over off a skier to backward point, Fletcher survived another three chances – on nine, 18, and 24 – to reach his fifty off 36 balls in the 10th over before completing three figures in the final over.

Stars lost wickets in clusters in reply. They crashed to 11 for three in the third over, recovered through a 28-run, fourth wicket stand between Matthews and Dinesh Chandimal (9) before collapsing again with four wickets, tumbling for 11 runs.

Tottering on 50 for seven at the end of the ninth over, Stars regained their balance through a 34-run, eighth-wicket partnership between Paul and his West Indies teammate Dominic Drakes (18) before the final three wickets fell for 16 runs.