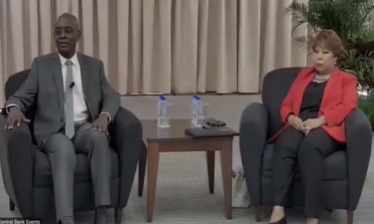 PORT OF SPAIN, Trinidad, Governor of the Central Bank of Trinidad and Tobago (CBTT), Dr. Alvin Hilaire, Tuesday defended the decision of the financial institution to relinquish ‘emergency control” over the Colonial Life Insurance Company (CLICO) that collapsed here in 2009 with billions of dollars in the red.

He told a news conference that the local economy is strong, and in that regard, it is safe to relinquish control over the company after the CBTT had been appointed under the Central Bank Act to exercise such control since 2009.

“The Central Bank is not in the business of running insurance companies or financial institutions. We have emergency control depending on the circumstance (and) that is what we did,” he told reporters, adding, “this time, we think it is opportune that the conditions are satisfied that we could exit comfortably.

“ CLICO is still large …about 20-something percent of insurance company assets, but we are comfortable that they will not be a (drain) on the financial system, the governance is stronger, the way of doing business has been regularised …

“So we are not concerned you will have a problem with the financial system now from this source,” Hilaire said, adding that the CBTT will still be monitoring its operations.

He said that the second arm has kicked “into high gear now because CLICO as an insurance company is like other insurance companies that will be managed or regulated by the Central Bank.”

He said the bank’s regulators are strong and experienced and “have learned over time, and they will be looking at things carefully…

“We do not want to micro-manage because that’s not our affair, but it will not anything goes,” he added.

In 2019, the Trinidad and Tobago government said it was “finally reaching a conclusion” regarding the collapse of the insurance giant, with Finance Minister Colm Imbert telling Parliament that the government had pumped an estimated TT$23 billion (One TT dollar=US$0.16 cents) in a bailout plan for the company.

He told legislators that when it came to office in 2015, the Keith Rowley government found the CL/Financial/ CLICO arrangement “in disarray with the shareholders and government in conflict and without any clear sight of a resolution.”

“Further, in 2011, an arbitration caused by the then government’s arbitrary transfer of shares in Methanol Holdings Trinidad Limited to CLICO without first offering the shares to the minority shareholder concluded with the sale of the asset at a price significantly lower than the market, losing three billion dollars in value in the process.”

Imbert said that in addition, following 17 extensions of the original 2009 Shareholder’s Agreement, without any clear repayment plan, the present administration had to act quickly when the former shareholders made a grab for CL Financial.

“In the interest of taxpayers, who had pumped billions of dollars into the CLICO bailout, we had no alternative but to apply to the High Court to liquidate the company, and on September 15, 2017, the High Court ruled that the operations of CL Financial would be fully placed in the hands of liquidators appointed in July 2017.”

Imbert said that this liquation process is now ongoing in the context of an orderly settlement of the debt owed by CL Financial to Trinidad and Tobago.

CLICO executive chairman, Clair Gomez-Miller, told the news conference that CLICO had a debt that had to be repaid.

“CLICO owes a debt. CLICO has to repay that debt, and that was the first message that everyone within the company had to understand. We will pay our debt. We will pay the interest because a lot of people forget that we pay interest,” she said.

“We are thankful that government bailed us …and we are going to be grateful, we are going to demonstrate our gratitude,” she said, insisting that CLICO will meet its obligations.

She said a lot of policyholders remained, making reference to a number of products the company offers to the public.

“You are looking at an organization with more than 100,000 customers that we serve. We opened for business although the doors were not open, we remained in operation throughout, and we made sure we paid every single claim, and we continue to do so,” she said.

Earlier this week, the chairman of the CLICO Policyholders Group (CPG), Peter Pernell, speaking on a radio program here Friday, said 13 years after the collapse, the authorities are returning CLICO “without ensuring the over 15,000 policyholders were paid…the balance of money contractually owed to them by CLICO.

“That is particularly so in circumstances where the government has been repaid all money. I want to repeat, all money that was advanced to CLICO as a result of the bailout and in light of the fact that CLICO is now in the black…to the tune of billions of dollars,” Permell told radio listeners, describing the conglomerate “as extremely profitable.”

In 2013, the former CLICO chairman, Lawrence Duprey, blamed the world recession and not mismanagement for the collapse of CLICO, the flagship company of the CL Financial group.