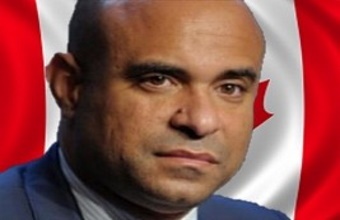 PORT AU PRINCE, Haiti, Former prime minister Laurent Lamothe is demanding an apology from Canada after the country linked him to “the egregious conduct of Haitian political elites who provide illicit financial and operational support to armed gangs” on the French-speaking Caribbean Community (CARICOM) country.

“I was totally shocked to learn, through social media, that the Canadian government has decided to sanction me for allegedly financing gangs and supporting criminal activities in Haiti,” said Lamont, who served as prime minister under the presidency of Michel Martelly.

“It is my belief that this arbitrary decision by the Canadian government is the result of false information relayed to them by my detractors. I defy anyone to show a single concrete piece of evidence showing my involvement in any type of association with gangs or linking me to any type of financing of criminal activities.

“The Canadian government should thoroughly verify its sources of information and, in full transparency, either make public all evidence backing their accusations or completely and formally withdraw them. I demand a public apology and reserve the right to go to the Canadian courts for the sake of defending my honor and my integrity,” Lamothe added.

Media reports here said that Martelly, who served as head of state from 2011-16, is also being sanctioned by Canada. That last weekend imposed sanctions on Senator Ronny Célestin, the former president of the Chamber of Deputies, Gary Bodeau, and former senator Hervé Fourcand,

In a statement, Lamothe described Canada’s decision as “absurd,” adding it “is not based on any verifiable fact or evidence, and is inconsistent with my track record of fighting crime and implementing law and order. I vehemently condemn the levity with which these false accusations were made.

“I applaud Canada’s interest in Haiti which is descending into chaos because of the unspeakable actions of armed groups and their sponsors who act with impunity.”

The former prime minister said he was the first to plead in favor of an international tribunal to shed light on the assassination of President Jovenel Moïse, “which may disturb many in the current government” Moise was gunned down at his private residence on July 7, last year and while several people including former Colombian army officials have been detained, no one has been officially charged with his assassination here.

“I was also one of the first Haitian personalities to seek armed international support to help the National Police (PNH) dismantle all gangs in Haiti, these same gangs that are funded and supported by certain members of this government.”

Lamothe said that during his tenure as prime minister from 2012 to 2014, the fight against insecurity was his main priority.

“Thanks to a policy of zero tolerance against armed criminals of all walks of life and of any background, against kidnapping and corruption, my government’s track record in the fight against organized crime during this period remains indisputable:”

He said his administration had dismantled the two largest kidnapping rings in Haiti, applied the full effect of the law against all personalities involved in kidnapping as well as strengthened the National Police through the purchase of weapons and equipment, including good-quality armored patrol tanks that are still in use today;