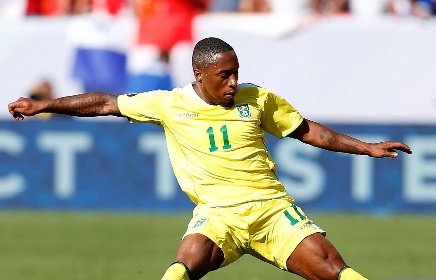 LONDON, Guyana international Callum Harriott, who said his career had been shattered despite being acquitted three months ago of raping a woman, has joined English League Two strugglers, Gillingham.

The 28-year-old winger, a free agent since leaving Colchester United in the summer of 2021, has agreed on a short-term deal at Gillingham, who are one from bottom in the fourth-tier table.

Harriott, who came up through Charlton’s youth ranks, has won nine caps for the Jaguars.
He played 95 times for Charlton from 2011 to 2016 before moving to Read, where he spent three years.
Harriott then joined Colchester, where he featured 64 times in all competitions over a two-season period.
“I am hoping I can bring that magic in a game and help with goals and assists. I will always work hard; I am not too far away in terms of fitness,” Harriott told the club website.
Harriott was cleared in August of raping a woman by a jury at Ipswich Crown Court.
Harriott said he was “devastated” by the allegation made against him after a night out in Colchester in November 2019 – the same month he scored his first international goal for Guyana in a 4-2 win against Aruba in a CONCACAF Nations League match, having made his debut for the Jaguars against Belize eight months earlier.
The unnamed complainant, a woman in her 20s, claimed she was raped while she slept at Harriott’s former home in Colchester, hours after the pair met in a cocktail bar. Harriott maintained the sex was consensual.
Following the unanimous not guilty verdict after a five-day trial, the footballer issued a statement on social media saying the damage his career had suffered was “irrecoverable.”
“The arrest relied upon baseless allegations which were exposed by a belated and full investigation long before the trial commenced,” said Harriott.