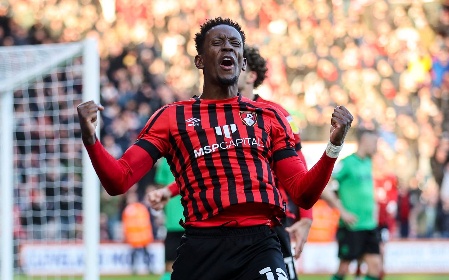 Bournemouth thrashed Everton 4-1 in a meeting of much-changed Premier League sides in the third round of the English Football League Cup after the 28-year-old Lowe gave the hosts a seventh-minute lead with a deflected shot that struck Nathan Patterson and looped into the net with goalkeeper Asmir Begovic stranded.

Gary O’Neil’s side went further ahead on 47 minutes through captain Junior Stanislas following a defensive blunder. Mason Holgate slipped as Begovic passed to him, allowing Ryan Christie to steal it. He squared to Lowe, whose shot was blocked by Begovic, but it rebounded to Stanislas to tuck away.

Everton, whose manager Frank Lampard made 11 changes following Saturday’s Premier League defeat against Leicester, pulled a goal back on 67 minutes through 26-year-old substitute Demarai Gray – a Reggae Boyz target – before Emiliano Marcondes and Jaidon Anthony secured Bournemouth’s passage to the next round.

Gray, who moved to Greece from the UK on a four-year contract in July, helped his top-flight club Aris Thessaloniki thrash Lamia 5-0, the 31-year-old Reggae Boy rounding out the scoring in stoppage time.

Gray’s switch to Greece was the first time in his club career that the Wolverhampton-born player had moved abroad.

The striker, who enjoyed a loan spell at English Championship club Queens Park Rangers last season, became available on a free transfer this summer after being released by Watford at the conclusion of his five-year contract with the Hornets, having scored 21 times in 125 games across all competitions.

In England’s fifth-tier National League, Jaguar Greenidge scored for both sides, opening his Maidstone account but later conceding an own goal, as Eastleigh came from behind to make it back-to-back league wins with a 5-2 victory against 10-man Maidstone United.

The Stones scored two quick goals in the first half, but 32-year-old captain Gavin Hoyte – who made three appearances for Trinidad and Tobago in 2014-15 – was dismissed early in the second half, allowing the Spitfires to come from behind and seal the three points.

Danny Whitehall opened the scoring for Eastleigh in the 16th minute before Maidstone equalized in the 37th minute through Ryan Galvin, and they turned the game around just two minutes later when Greenidge, a 26-year-old defender who joined the club last month, headed home from a corner to take the lead.

Hoyte’s 50th-minute dismissal, however, allowed the Spitfires to gain the upper hand, and an own goal from Greenidge two minutes from time wrapped up three points for the hosts to leave Maidstone firmly in the drop zone.