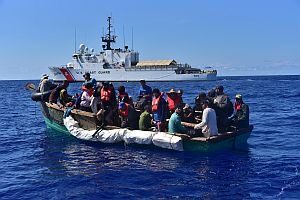 “The Coast Guard and our partners have increased air and surface patrols in the Florida Straits, Windward, and Mona Passages,” said Petty Officer Nicole J. Groll, Coast Guard District Seven. “These waterways are dangerous, unpredictable, and the risk of losing life is great.”

The Coast Guard said it repatriated the 48 Cuban migrants on Thursday during the interdictions off the Florida Keys.