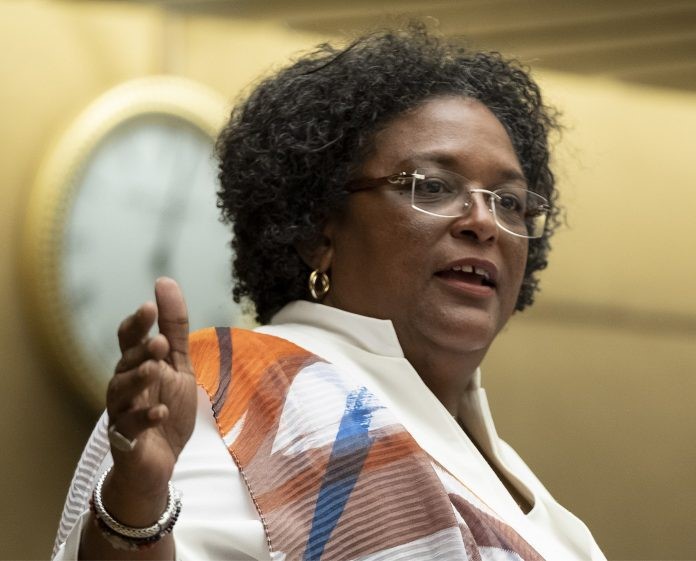 Caribbean Times is proud to associate this publication’s name with ringing support for the decision by the prestigious TIME Magazine to include Barbados’s charismatic and capable Prime Minister, Mia Mottley, as one of the world’s most influential leaders. This is a tremendous accomplishment for Barbados, Ms. Mottley, and the wider Caribbean/CARICOM region. Indeed, Prime Minister Mottley is an enormous role model to millions of young girls and women of her level-headed competence and firm, decisive leadership style.

CARIBBEAN TIMES is here reproducing verbatim the endorsement of Prime Minister Mottley written by the Director-General of the World Trade Organization (WTO) that appeared in a recent edition of TIME Magazine: Some stand tall and stand out no matter where they are from—whether a large, densely populated country or a small island nation. Prime Minister Mia Mottley of Barbados is one such person. Bold, fearless, and possessing an extraordinary intellect and wit, the Prime Minister is a brilliant politician who knows how to shake things up.

Since she was a young woman growing up in the Caribbean, Mia Mottley has always cared deeply about critical issues impacting the world. From poverty to debt to climate

change, she is a vocal advocate on the world stage for responsible stewardship of our planet so that nations large and small and people rich and poor can survive and thrive together. At COP26 in Glasgow late last year, she chided the world’s leaders for not working more diligently to limit the potentially catastrophic impacts of climate change, telling them to try harder. While chair of the World Bank and the International Monetary Fund’s Development Committee, she reminded the world’s finance gurus that a country’s per capita income may not always be the best measure of its wealth. After all, one climate-change-induced hurricane can significantly affect that wealth.

Mia Mottley is an icon in her country, having won re-election. The Prime Minister strides boldly on the world stage. She embodies our conscience, reminding us all to treat our planet, and therefore one another, with love, dignity, and care.

Mia Mottley is the granddaughter of Ernest Deighton Mottley (1907–1973), a real estate broker and successful politician, particularly at the parish level. He was the first Mayor of Bridgetown (1959), representing Bridgetown in the House of Assembly from 1946, who belonged to the conservative Barbados National Party. He was granted the Ordinary Commander of the Civil Division for public services in Barbados in June 1962. He assisted Wynter Algernon Crawford (1910–1993), Barbados’s Trade Minister, at the Independent Conference in London during June and July 1966.

Mia’s father, Elliott Deighton Mottley, was a barrister who sat in the House of Assembly for a relatively short time, vacating the seat to become consul-general in New York. He was educated at Eagle Hall School, Harrison College (Barbados), Middle Temple, and the Inns of Court School of Law. He once served as Bermuda’s attorney-general and sat on the Court of Appeal of Belize.

He married Mia’s mother, Santa Amor Tappin, in December 1967, three years after being called to the Bar, and was elected to represent Bridgetown in May 1969. It has been suggested that the Prime Minister of the time, Errol Barrow, used his parliamentary majority to abolish local government altogether and therefore undermine Elliott Mottley’s strength in the political arena. Mia Mottley was educated at Merrivale Preparatory School, the United Nations International School, and Queen’s College (Barbados). She later studied at the London School of Economics and was awarded a law degree from the University of London in 1986.

Mia Amor Mottley has lived a public life of firsts – first female leader of the Barbados Labour Party and the Opposition; first female Attorney General, a post she held for five years; and youngest ever Queen’s Counsel Barbados. On 25 May 2018, Mottley became the eighth Prime Minister of Barbados and the first woman to hold the post. CARIBBEAN TIMES extends our warmest congratulations to Prime Minister Mia Mottley on this tremendous achievement and acknowledgment.