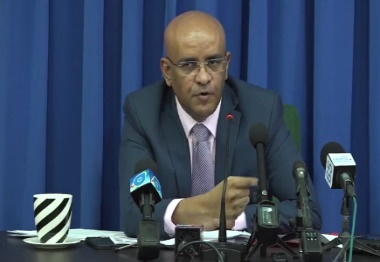 GEORGETOWN, Guyana– Vice President Bharrat Jagdeo Monday said that the Guyana government is yet to decide as to whether it will allow for the establishment of a national oil company (NOC) indicating that the Irfaan Ali administration is prepared to give the matter careful consideration.

Jagdeo told a news conference that while the government favors a company with a passive form of ownership, concerns have been raised both by the government itself and other stakeholders regarding establishing a national oil company.

“No decision has been made…there are a lot of cons and few pros,” Jagdeo told reporters, adding, “from serious sources, we are getting a list of concerns that are universally known regarding the establishment of a NOC.”

Jagdeo said among the concerns is the time it will take to develop the company, the overload it will place on domestic capabilities and capacity, and the corruption associated with national oil companies.

“These examples are encouraging,” he said, adding that the government itself had some concerns similar to those expressed by the International Monetary Fund (IMF) that had earlier advised Guyana to secure a higher share of profit oil through its model Production Sharing Agreement, rather than actively participating in the task of petroleum development through a national oil company.

“From our own and what we have been looking at, an examination of the situation, we believe that having an old styled model for a national oil company could present major difficulties,” Jagdeo said

I indicated that the government doesn’t take the IMF lectures as gospel.

“With net-zero by 2050, it becomes harder to raise money globally for national oil companies…If we were to vest all the remaining assets in a national oil company, it could lead to too much concentration and slow down the process of exploration,” Jagdeo said.

He told reporters that having one strategic partner to work with would mean a much slower process of exploiting the resources when Guyana should accelerate these resources’ development.

“Therefore, the model we are talking about should we go down this route is not old-styled NOC… we want a more passive.