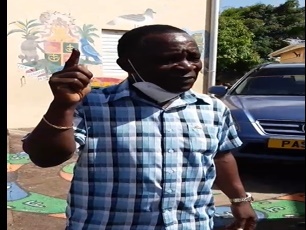 ST. GEORGE’S, Grenada– The leaders of the two main political parties here Thursday said they were equally confident of winning the general election as long lines of voters cast ballots in the poll that had been called ahead of the constitutional deadline.

Prime Minister Dr. Keith Mitchell, who is seeking to lead his New National Party (NNP) into a historic third consecutive victory, said he was pleased with the turnout, suggesting that the voters had accepted his request to give him a final turn at the head of government in this Caribbean Community (CARICOM) country.

“I am extremely confident; I think the message has been received, I think the opposition has handed us a good wicket,” said the 75-year-old Mitchell, who in the last two general elections led the NNP to a clean sweep of all 15 seats in the Parliament.

He said he was disappointed with some of the tactics employed by supporters of the main opposition National Democratic Congress (NDC), some of whom he alleged were wearing party colors and staying long within the voting area.

“But I am very confident based on all I have seen around the country, right around Grenada, Carriacou, and Petite Martinique, I am highly optimistic about the results.

For his part, the NDC leader, Dickon Mitchell, 44, who is facing the electorate for the first time, told the Caribbean Media Corporation (CMC) that he was encouraged by the turnout of voters, and it appears the country is prepared to give young people an opportunity to chart the way forward.

“We are pretty confident, although we had a short time to prepare and a short time for the campaign. I think we ran in the circumstances of the movement as best as we could.

“The feedback has been overwhelmingly positive, and we feel the momentum is with us, but obviously, we have to await the results.”

Mitchell, who is contesting the St. David seat against the incumbent and Foreign Affairs Minister, Oliver Joseph,  said the lines outside the polling stations “have been pretty long and suggest a high voter turnout. We hope people continue coming out. To cast their ballots.”

The Parliamentary Electoral Office (PEO) has been appealing to employers to obey the law and allow workers the necessary time to cast their ballots.

In addition, the police have also warned against using electronic devices within the 285 polling stations to record votes and post on social media, saying that these offenses will be dealt with.

The PEO said 87 506 people had been registered to vote for any of the 41 candidates representing five political parties and one independent seeking a seat in the 15-member Parliament.