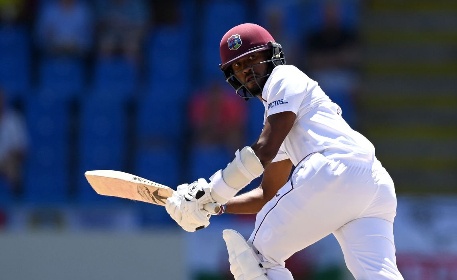 CANBERRA, Australia, Nov 17, Captain Kraigg Brathwaite tasted form on the tour of Australia, one of three players with half-centuries on day one of West Indies’ opening tour match against the Combined NSW/ACT XI here Thursday.

The right-hander top-scored with 75 while Shamarh Brooks added 56 and all-rounder Jason Holder an unbeaten 50 as the tourists gathered 297 for five in their first innings at the close at Phillip Oval.

Test vice-captain Jermaine Blackwood weighed in with a patient unbeaten 42, capping off a strong performance by West Indies in the buildup to the first Test in Perth starting in a fortnight.

West Indies were given a positive start after choosing to bat. First, Brathwaite facing 114 deliveries and counting ten fours, and Brooks – in an unfamiliar opening role – punched five fours in a 116-ball knock as they posted 133 for the first wicket.

They fell in close proximity to each other with 16 runs added in the space of 14 deliveries, and when Raymon Reifer (21), Nkrumah Bonner (15), and Kyle Mayers (17) wasted starts, West Indies found themselves stumbling at 205 for five.

However, Holder and Blackwood then combined to rescue the innings from further decline, putting on 92 in an unbroken sixth wicket stand.

Holder, the Test captain on the Caribbean side’s last tour Down Under seven years ago, counter-attacked with ten fours in a 79-ball knock while Blackwood provided support, facing 141 deliveries and hitting four fours.

Left-arm spinner Riley Ayre, who accounted for both openers, was the best bowler with three for 70.