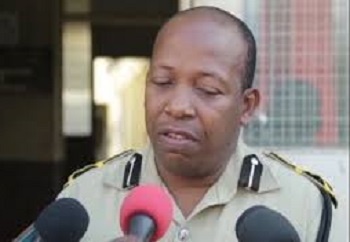 He said while his statement should not have the business community feel intimidated or unsafe, he would prefer that the businesses hire police officers who are on actual duty.

“And when I say actual duty, I mean: who are not interdicted to perform special duties for them. But when it comes to officers who are on interdiction, it means that we as a department have identified them as a bad seed, and I would discourage members of the public from hiring them,” Williams said.

He said while the police can’t direct the business places whom to hire, “truth be told, they are on interdiction, they are on half pay, and they may need to do something else for ends to meet to be able to meet their financial obligations.

“But we need to look at the reason why they are on interdiction, and again, that should signal to you as a business person whether or not you should hire them as your security or for whatever reason within your organization,” he said.

Meanwhile, Williams has confirmed that a police officer is under investigation following allegations that he sexually abused a female minor in Corozal District.

Williams, who is also the Commander of the Professional Standards Branch (PSB), said he had instructed investigators to probe the allegations amid media reports that the officer in question may be attempting to pervert the course of the investigation by trying to get the victim and her family to retract their claim against him.

“I don’t know where that could be coming from. I know that, yes, there is such an accusation, and my instruction … is to make sure that we do all the necessary investigation to ascertain if, in fact, the allegations are true.

“I am not going to say that it is not true because I was not there, and when it comes to incidents that involve abuse against women or children, I would never, ever countenance such behavior,” said Williams.

He said from the briefing he has received “subsequent to my instructions, is that there were many inconsistencies and they were reluctant on the part of the complainant to give certain information.

“I trust and hope that what you are saying is not true because if, in fact, there is pressure from any police to the family for them to back off, that I will not tolerate. That certainly is tantamount to perverting the course of justice or tampering with a witness. It‘s a criminal offense, and police officers should know that” the top cop told reporters.