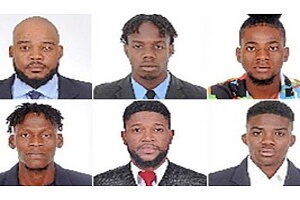 OSCEOLA COUNTY, Florida – Law enforcement officials are continuing the search for six members of Haiti’s Special Olympics delegation who disappeared after checking into their hotel on Monday.

The authorities have named them as Antione Joseph Mithon, 32; Nicholson Fontilus, 20; Peter Mianovich Berlus, 19; Anderson Petit-Frere, 18; Steevenson Jacquet, 24 and Oriol Jean, 18, all of whom are associated with the country’s soccer team participating in the Special Olympics USA Games now underway in Orlando.

The police said that the group was last seen Monday afternoon at the ESPN Wide World of Sports complex. All six men left behind their personal belongings.

“We are in communication with Walt Disney World, Special Olympics, and our Law Enforcement and Federal partners,” the Sheriff’s Office release said.

Authorities have said they don’t believe the health and safety of the group are at risk, and foul play is not suspected at this time.

This is an isolated event, the Sheriff’s Office said.