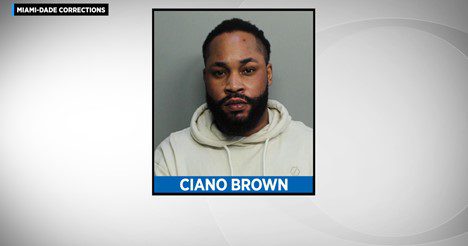 A man caught on camera placing a phone under a woman’s dress has been arrested. According to detectives with the Broward Sheriff’s Office North Lauderdale District, Ciano Brown surrendered to authorities late Sunday night.

According to police reports, the crime occurred at approximately 6:47 p.m., Friday, September 9, at 7900 W. McNab Road. A surveillance video released to the public on Friday, September 23, shows the female victim dressed in a floral dress browsing through the cosmetic aisle of a store. A man wearing a teal baseball cap and dark clothing is then seen walking toward the victim before bending down and extending his arm under the woman’s dress. In the subject’s hand is a cellphone, which detectives believe he used to videotape and or take pictures of the victim’s undergarments without her permission or knowledge.

Detectives identified Ciano Brown as the man in the video, and a warrant was issued for his arrest. Detectives also learned that Brown was arrested last year in Miami-Dade County for similar offenses.

On Sunday, September 25, Brown went to the Broward Sheriff’s Office Main Jail and turned himself in. He was taken into custody at approximately 11:27 p.m. and faces one count of video voyeurism.